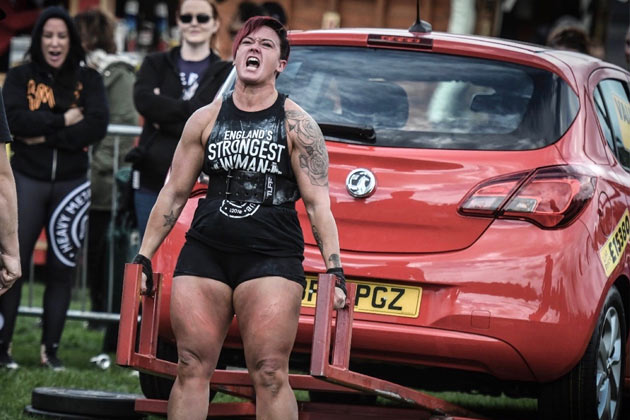 When Gemma Ferguson flies to the USA this March to compete in the 2020 “Arnold’s” Sports Festival she’ll have come a long way from her lowest point in 2015.

After serving in the Army for nine years - including posts in Iraq and Afghanistan - Gemma had trouble adjusting to civilian life. Her problems began to spiral and when she lost her job and her flat she moved home with her mum, Jacqui. It was Jacqui who persuaded Gemma to make the call to PTSD Resolution - the first step on her journey to become Britain’s Strongest (U82kg) Woman!

So how did she go from her lowest ebb to pulling buses, lifting cars and handling up to 195kg in weights?

After growing up in Albourne, West Sussex, Gemma joined the The Royal Corps of Signals and spent nine years serving as a Communications Systems Specialist in the Middle East, Germany and Northern Ireland.

It was her first tour in Iraq that had the greatest impact on her, but Gemma says the exact cause of what was later diagnosed as PTSD is hard to pinpoint. Working in a prisoner processing facility in Iraq, followed closely by a tour in Afghanistan, Gemma says she “saw and heard a lot of things I try to forget now.” Echoing the thoughts of many Veterans, she says, “I can’t say why I have been more affected than others who I was on tour with. Or they were - but haven’t realised it yet.”

Leaving the army in 2012 proved difficult for Gemma and before long she was drinking heavily and diagnosed with depression. Back home with her family and dealing with increasing anxiety, she decided she needed help. After summoning the courage to go to her local GP, she says, “They just weren’t ready for me and couldn’t give me the help I needed.”

She called Combat Stress but was faced with the prospect of a waiting list. Gemma and her mum kept searching and when they eventually found PTSD Resolution an appointment with a therapist was made within days.

It was around this time Gemma’s extraordinary gym journey began. At first she started training to lose weight, feel better about herself and give herself something to focus on. The discipline she built up, slowly and consistently, led to big things.

After being spotted by a trainer at her gym, Gemma was encouraged to try Strongwoman training and hasn’t looked back - in just four years she has won England’s Strongest U82kg Woman and qualified for the Arnold’s after placing third at Britain’s Strongest Woman in August.

Today, Gemma lives in West Sussex with her two springer spaniels, Murphy and Jackson. She balances a full-time job as an Openreach engineer with cross-country running, cooking, reading and an intense 5-days-a-week training schedule led by her personal coach.

With her sights firmly set on the Arnold’s in Ohio in March, all of the PTSD Resolution team acknowledge her incredible determination and resilience - and wish her the very best at the championships, with her continued recovery and with her future goals.

As Gemma says, “I’m very excited! I’m the fittest and strongest I’ve ever been at just 35 years old and I feel really ready for this competition.”