The Veterans Foundation has renewed its support with a second donation of £19,500 to PTSD Resolution in order to aid the charity's efforts to help military service personnel suffering from military trauma. To date, the therapy service has had nearly 3,000 referrals, all of which have been delivered free of charge, offered through a network of 200 therapists in the UK and delivered in person, online and by phone.

PTSD Resolution, Charity No. 1133188, provides therapy that is free, effective and delivered promptly and locally through a network of 200 therapists nationwide. Within an average of six sessions, 78% of cases seeing an improvement in reported symptoms to where the client and therapist agree that no further therapy is required.

The charity is one of the only organisations to provide therapy to veterans who suffer with addiction issues or may be in prison. Services are also delivered to veterans’ family members, including partners and children who may experience the symptoms of trauma from living with a traumatised veteran. 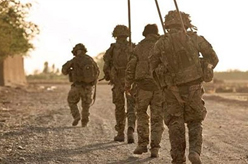 The Veterans Foundation acts as a national benefactor for British Armed Forces organisations, sponsoring life-changing projects that allow these organisations to provide much-needed support to veterans and their dependents.

The Veterans’ Foundation raises funds through its popular Veterans’ Lottery. It provides a long-term, sustainable source of funding and gives players the chance to win up to £25,000 in each monthly draw.

This, along with direct donations, has enabled the Veterans’ Foundation to help fund a range of worthy schemes to tackle issues such as physical injury, mental health, homelessness and poverty.

Veterans' Foundation CEO, David Shaw, expressed the organisation's pleasure in supporting timely mental health care for veterans and their dependents thanks to the essential work that PTSD Resolution is doing.

“The VF is deeply thankful to contributors and lottery subscribers, and therefore please keep supporting us so we may continue to assist veterans and their families in need.”

Following the latest meeting of the VF trustees, 40 UK-based military charities and organisations that are dedicated to helping former soldiers in need received a sizeable sum of money that will immediately benefit them.

More than 260 military charities and not-for-profit organisations have been funded by the Veterans' Foundation with grant awards totalling more than £7.1 million since the foundation was set up in 2016.

Thanks to the players of the Veterans' Lottery, as well as those who have directly donated to VF, this has all been made possible.

The Veterans' Foundation CEO, David Shaw, remarked, “Thank you for your generous support. To date, we anticipate giving away grants of £4.5 million by the end of the year.