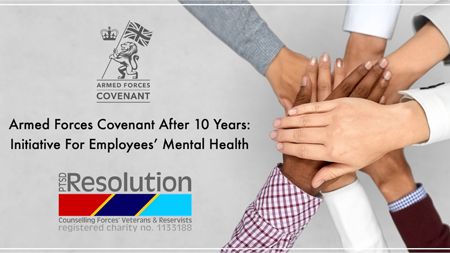 On the tenth anniversary of the Armed Forces Covenant in November 2021, the armed forces' charity PTSD Resolution is highlighting opportunities for organisations to support veterans and meet Environmental, Social and Governance (ESG) commitments. PTSD Resolution has helped a number of companies to attain awards under the Defence Employer Recognition Scheme (ERS).

With the Armed Forces Act 2011 ten years ago, the nation confirmed a commitment to the Royal Navy, Army, and Royal Air Force, as well as the families of those who have served. The Covenant was founded on two fundamental tenets.

The Armed Forces Act 2011 required the UK Government to issue an annual report on the progress of the Covenant. The report outlines the methods used to assist active-duty military people as well as veterans. It is an opportunity for the UK Parliament and the general public to see how the Covenant is used to directly benefit the armed forces community.

The Covenant at Work

Education, health care, finding a job, and financial assistance are all areas targeted in the Covenant's promise of support.

The legislation is in place to ensure that those who have been in the military and are transitioning into civilian life, or those who have been injured while serving, are not disadvantaged. The Covenant can be put to use in a variety of ways, such as helping children of military members who need extra assistance or easing the financial burden of those serving abroad.

Organisations can join the Covenant by making relevant pledges, such as discounted services or other perks. A recruitment firm, for example, might promise to guarantee veterans an interview. Similarly, a school could make a promise to provide additional assistance to children of service members during deployment.

More than 5,800 organisations have signed the UK Armed Forces Covenant, according to the Annual Report for 2020. Over 100 military charities received a total of £6 million in grants to continue their work during the COVID outbreak, as reported in the government's statement.

Organisations can meet their CSR/ ESG commitments under the Covenant and the Defense Employer Recognition Scheme (ERS) by working with PTSD Resolution, the mental health charity for veterans, reservists and their families.

It is the goal of the ERS to encourage companies to show their support for the military and encourage others to follow suit. Employer organisations that support and actively match their policies with the Armed Forces Covenant can earn bronze, silver and gold awards through this programme.

PTSD Resolution partners with organisations that recognise the importance of prompt and efficient access to mental health care for their veteran employees. There are 200 therapists in the charity's network, located throughout the UK and available for booking through a central helpline, with a first appointment usually within days. Treatment is provided free of charge to the veterans' community, and at a reduced rate to all other members of the organisation.

Why Partner with PTSD Resolution?


The Future of the Covenant

The Armed Forces Bill 2021 will introduce a statutory duty on certain public bodies to have due regard to the Covenant's principles when they carry out functions in housing, healthcare and education. The aim of this is to raise awareness of the Covenant and also to improve the delivery of pledges.

Organisations planning their engagement with the Armed Forces' Covenant in 2022 can contact PTSD Resolution for further information.